Did I say that a second novel is just as hard as a first? I take that back. If the second book is a sequel, it’s way harder. My primary issue is trying to figure out how much recap to include. Do I assume that the reader of this book has read the first? Do I need to cover people’s jobs? Appearance?

My only solution is to treat myself as if I’m the reader. Recently, I read the third book in a trilogy. It had been two years since I’d read the second book, so I didn’t remember who some of the characters were, and how they got into the situations they were in. So for this first draft, I’m throwing in bits here and there to refresh the reader. I may add more, or I may subtract some, when I go back in on subsequent drafts. We’ll see how I feel then.

As I write this first draft, I have to keep reminding myself that this isn’t in any way final. As I said to Scott, this is really an opportunity for my brain to vomit out words onto the page, so I’ll have something to work with later. (He thought the way I phrased that was gross, FYI.)

So far I’m not hitting numbers as large as last time – as of writing this post, a week in, I’m averaging just over 2,100 words per day, but it isn’t the ferocious 2,700 words per day I averaged on the first book. But I’m also trying to squeeze more real-life into my evenings, so I’m not just eating, then writing, then sleeping.

This time around, we live in a different apartment, with an awesome walking trail right outside our door. It’s also a half-hour closer to work. So now, I get home from work, change clothes, then Scott and I go and walk for a couple of miles. It’s a great chance to wake my brain and body up after a long day at work. (And since Scott is also in the middle of writing another book, it’s a great chance to bounce ideas off of each other.) Then a shower, dinner, writing anywhere from 1.5 to 2 hours, and then I still have an hour or so to watch TV or play video games or whatever I want before bed. 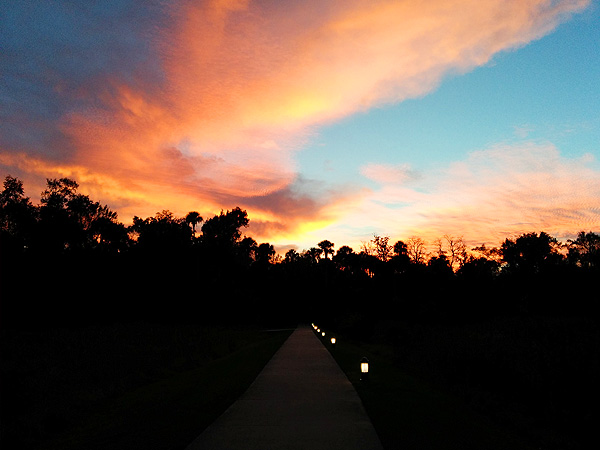 Our evening walking trail. What a dump.

I’ve made sure that backing everything up is also part of my daily routine. After I finish writing, I copy the total number of words into a spreadsheet, and a formula tells me how many words I wrote that particular day. Then I copy the draft, that tally sheet, and any other documents I’ve made changes to (usually either the outline, my cheat sheet of characters, or both) over to cloud storage. I also have an on-site backup drive, but I like having a copy out there somewhere that isn’t inside my house.

I agree with some comments that We Could Be Villains starts out slow. It’s a lot of exposition and backstory right off the bat. The nice part about writing its sequel is that I don’t need to worry about the whole new-person-meets-team part of things. The first two chapters get you straight into a heist, because action is awesome.

One of the coolest things so far, and something I loved while writing my other book too, is the collection of browser tabs I have open at the end of a writing session. Thank goodness for the internet; I can’t imagine having to find a book on the bookshelf to research things, or have to go to the library to find a book on a specific topic. Or owning a full set of encyclopedias!

One day while outlining, I finished work for the day and closed tabs with: the periodic table of the elements, a top-10 list of the best burger places in a specific city, geological surveys, and an airline timetable. I’ve also had to completely re-imagine a couple of things, because the science was just impossible. I want my science to at least be slightly possible, although a lot of it is probably farfetched.

So, onward I go, vomiting out words onto the page so I have something to edit later. Some of it feels good, some of it I know needs a lot of work. (A couple of chapters have notes at the beginning, stuff like “add in X, think about Y, maybe cut Z.”) But since starting is the hardest part, I’m already ahead of the curve.