Tiny lenses … for my phone

(Title sung to the tune of “Tiny Bubbles,” which is totally stuck in my head right now.)

So while reading an article on BoingBoing the the other day, I experienced that thing where you go from not knowing an item exists to wanting it desperately, all in a span of 30 seconds. The item in question: a set of tiny clip-on lenses for your cell phone. 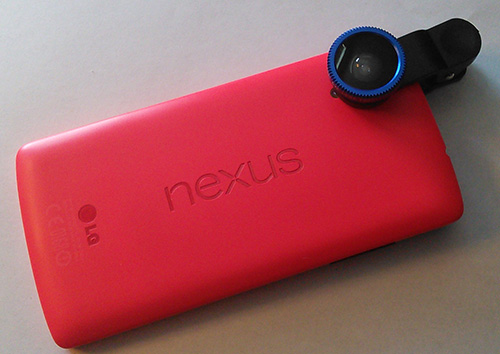 Immediately, I dashed over to Amazon. The author of the BoingBoing piece had ordered his set for about three bucks, but they took a month to arrive from China. Since we’re moving in a little over a month, and I felt the need for immediate gratification, I spent twice as much and bought a six dollar set with Prime shipping.

(Here is the set I bought; looks like they aren’t available on Prime anymore. But if you search for “clip on cell phone lenses,” there are a gajillion choices available, some Prime.) 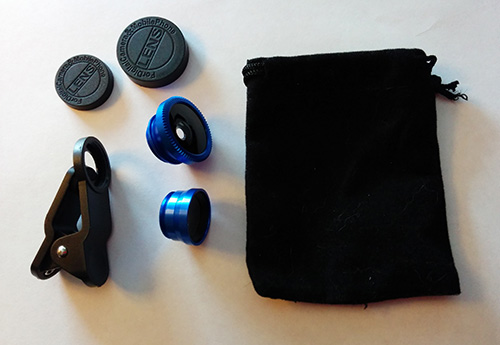 The set comes with three lens options: fish eye, macro, and wide angle. And it’s a little confusing at first, because in order to use the wide angle feature, you have to have the macro and wide angle lenses attached to each other. Somehow they work together to create magic. Many reviews on many different options on Amazon have complaints that people only received two lenses, but they didn’t realize that two of the three arrive attached as a unit.

They even include little lens caps (although the back side is still open to the elements) and a carrying bag (which I had to re-sew along the bottom, as the stitching wasn’t that great).

So, onward to testing! Above, you can see the fish eye lens attached to my phone. Apparently, you can put these on over a case, but I put them straight onto my phone (yes, my phone itself is that strange orange color). The hardest part is getting them centered over your camera’s lens, but you can put just the clip part on by itself, center it, then screw on the tiny lens you want to use. 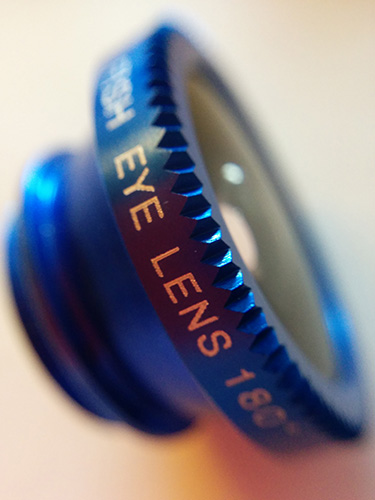 First, let’s talk about the macro lens. At first, I thought it wasn’t working right, but I figured out that you have to get REALLY close to things. If it’s blurry, you’re still too far away. You gotta get right up in your subject’s grill. 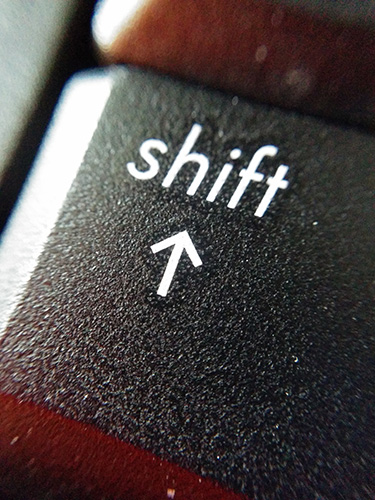 Seriously, you gotta get close. It’s almost like a tiny microscope that clips onto your phone. I took a picture of the wrinkly old-lady skin on the back of my hand, but I’ll save you all from that. I don’t even want to see it, so I can’t imagine you’d want to.

Here’s where I move on to the wide-angle lens, and tell you that I don’t really have any good shots with it. 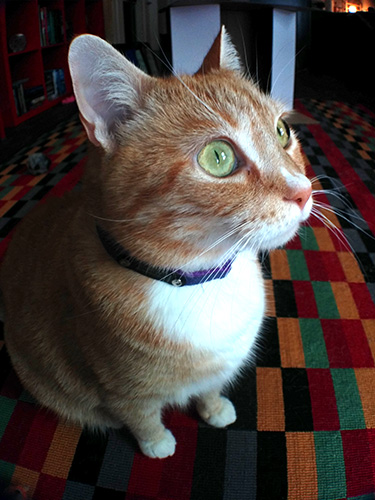 Of course, this is a good shot, because it’s of a sweet baby kitty. But generally speaking, it doesn’t seem like using the wide angle lens is all that different from taking regular pictures. Maybe my phone already takes pretty wide angles? At any rate, it doesn’t seem to give me much extra space along the sides, but it does warp the image a bit, giving it a rounded look, as you can see from the pattern of our living room rug.

Anyhoo, onward to the fish eye lens! A negative Amazon review of this one cracked me up — someone complained that it left “a black rectangle around the outside.” Because, I guess, they expected their image files to come out round. 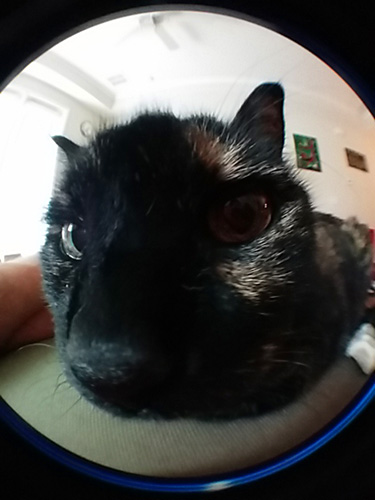 A couple of issues with the fish eye lens: the blue color of the lenses I chose, and difficulty focusing.

I found that in most of my fish-eye pictures, especially ones in bright light, there was a ring of blue around the outside, since that’s the color I bought the lenses in. So if you want an all-black ring around your pictures, I’d advise getting a set of these in black. I didn’t even think about the possibility that they’d capture a wee bit of the edge of the lens. 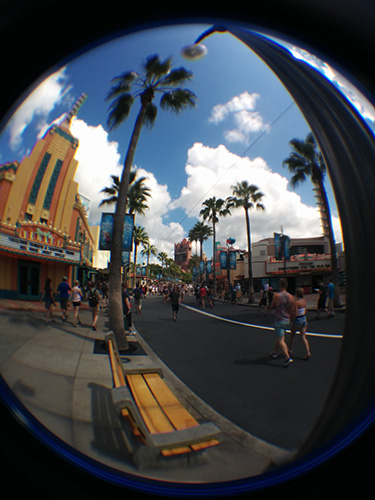 The second part is the focus. Sometimes I was able to get things to focus really well, and other times, no matter what I tried, things came out kind of blurry. I’m not sure if this is a case of unsteady hands, or a smudge on the lens (the little bag they came with doubles as a cleaning cloth, which is handy, but I felt like I was constantly having to wipe these lenses for smudges and fingerprints while we were outside).

Other shots, though, came out relatively crisp and sharp: 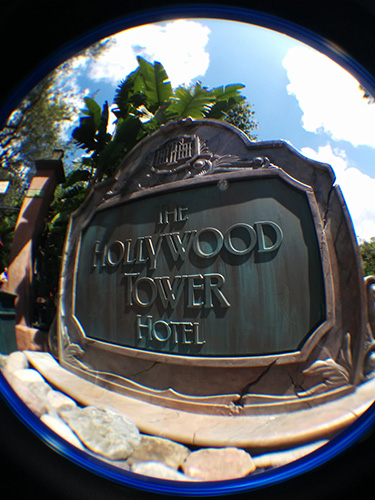 Or, at least, sharp in the center of the picture. I expect things to get a little blurry around the outside, due to the warped nature of the whole thing. But it was hard most of the time to get things in sharp focus in the very middle of the shot.

The fish eye will definitely merit a lot more experimenting, with close-up and distance stuff, as well as low light versus bright light. I don’t think the blurriness problem is necessarily an issue with the lens itself, since I did get a couple of shots that were on the sharper side — I think it’s a matter of learning how to use it correctly.

So, overall: fun and cheap! The macro is the best of the bunch so far. They also make other lenses, like a hilarious tiny telephoto lens. And you can find an option where you stick a magnetic ring around your phone’s camera, then just attach the lenses via magnet, instead of with a clip. 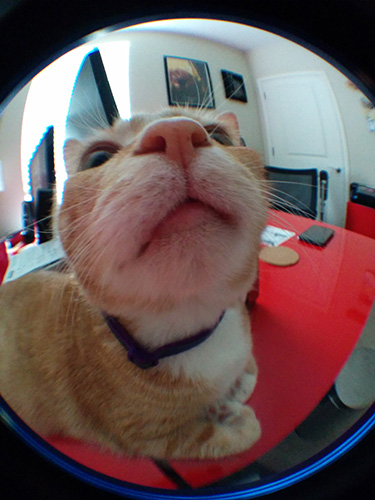