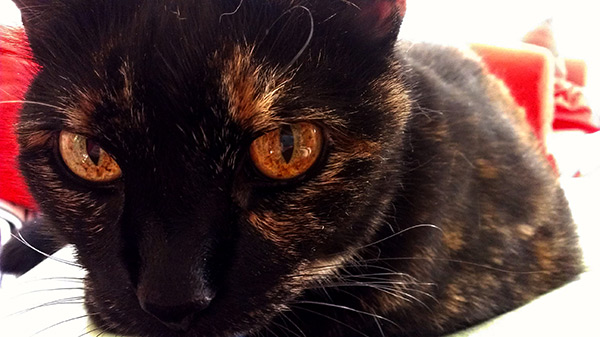 Last week, we had to have our wonderful, cranky, crotchety 17-year-old cat, Trouble, put to sleep.

We got Trouble way back in 1998 at Seattle Animal Control. We wanted to get a companion for Commie, and as always, decided to let the cat choose us. Or choose me, as it turned out — we passed by Trouble’s cage (marked with the temporary shelter name “The Little Ninja”), and she reached through the bars and grabbed at me. From that moment on, she was very much my cat. She didn’t mind Scott all that much if I wasn’t around, but for the most part, if I was in the room, I was definitely the most important monkey around.

Trouble was skittish around other people, but loved to cuddle with me. She was fairly quiet for a lot of years, then really came into her tortoiseshell voice — creaky meows that we referred to as murbling, bitching, nagging, and various other terms meant with love.

Since Commie passed two years ago, Trouble’s health had been up and down — thyroid issues, mystery wheezing and noxious bad breath (chest X-rays were clear, the vet was mystified, so we went with antibiotics and crossed our fingers; she responded to the treatment, but we still don’t know what was really wrong with her). Even up to 2 weeks before our cross-country move, we weren’t sure if we’d be moving with one cat or two. We had more than one time in the last year when we prepared to lose her.

She made it across the country, and took right away to the new apartment (the ground-floor windows with a view of people walking their dogs has proven popular). But then she took a turn for the worse a few days after we arrived. She stopped eating, stopped socializing, stopped grooming, and seemed absolutely miserable; she found an empty bookshelf and stayed there, with only an occasional shaky walk out to visit the litter box (where things were left uncovered, and weren’t pleasant). We rushed her to a vet down here; she’d lost over a pound in just over three weeks. We all agreed that while we could run more tests, and try new medications in an attempt to pinpoint what was making her shut down, trying to extend her life a few more weeks or months . . . she was pretty clearly telling us that she was done.

I doubt I’ll ever have another cat who loves me as much as that little cat did. I think she would have crawled inside of me if she could, sometimes. Of course, we’ll get Cheddar another companion; hopefully someone closer to her own age. Probably not another tortie, though — we already had the best one there was. 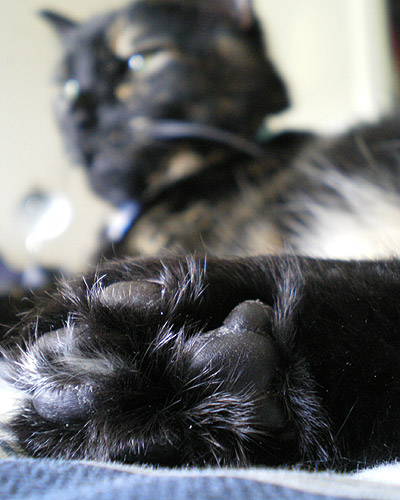