It’s been a while since I’ve posted here! (Although, of course, I post every day over at Holiday Doodles.) I’ve been busy with graphic design school, and work, and not only did we move across the country back in September, but we also then bought a house and moved again in January. So it’s been a busy first quarter of 2016!

As a birthday present to myself, I got some font creation software. There are programs out there that cost upwards of $500, and are apparently the gold standard for font creation. I, however, didn’t want to spend more than a hundred bucks — I wanted to dip my toe in first.

I test-drove three programs: FontForge (free, open source), TypeTool ($47.99 USD), and Type 3.2 ($55 USD). I created a font called Trawll with the free FontForge program, but its pen tool wasn’t intuitive, I couldn’t easily import letters in from another program, and it just wasn’t bonehead-simple enough for me. I tried the demo of TypeTool, but it would only let me open it once; after I closed it, it’d crash when I tried to open it a second time. I had to reboot my computer each time I wanted to use it, which was a total no-go. Shame, because it has a feature where you can copy something in Adobe Illustrator, then paste it directly into TypeTool. (Though its pen tool wasn’t great for me.)

I ended up purchasing Type 3.2 after trying out the demo. Its pen tool is the most intuitive of all of the programs I tried, and it has an image import feature. It lacks the same stroke-drawing capabilities as the other two, but I’m OK with that — I like to draw things in Illustrator. As long as it’s easy to port things over, it works for me.

So after creating an unconnected handwriting font called Cavorting, I decided to try my first connecting script font. The connections are what makes it a challenge — each letter has to be able to fit seamlessly with the next. (Spoiler alert: I haven’t achieved perfect seamlessness, because that would take a LONG time.)

I started by drawing my letters in Illustrator. I’ll use the lowercase E as my example through a lot of this: 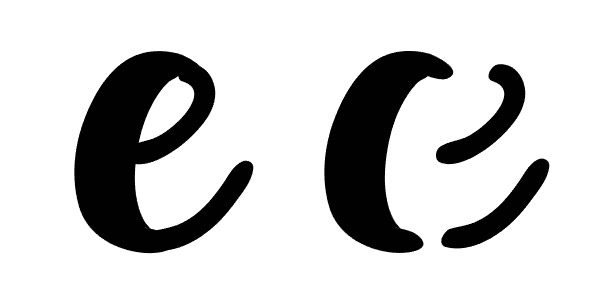 I used two weights of calligraphy brush: a wider, flatter one with an angle, and a thinner one that was almost completely round. I could combine strokes to get a nice effect. You can see on the right, where the strokes are broken apart, how the E is made up of one wider stroke on the left, then finished off with two strokes from the thinner brush. And yes, it’s a little lumpy in spots where the strokes meet. No worries, we’ll take care of that soon. 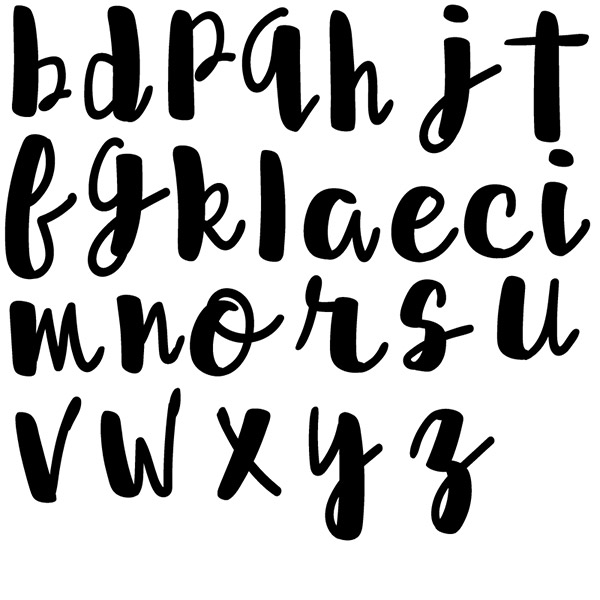 I drew all of the letters at the same time and saved them all in the same large image. This made importing them into Type easier, and it also made it easier to keep things the same size. I grouped the taller letters together so I could compare their scale to each other; likewise the shorter ones. 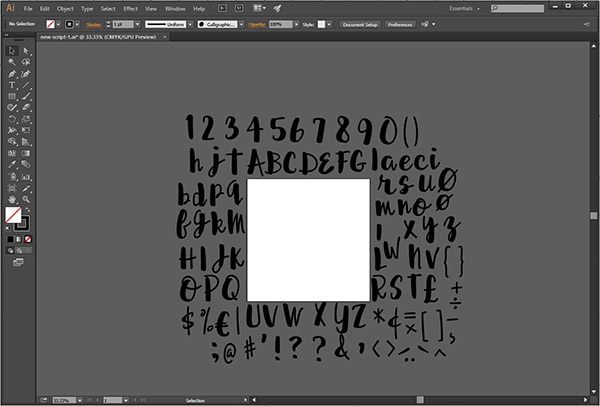 After completing each set and saving them, I moved the letters outside of my work area. I didn’t delete anything, because you never know when you’ll want to compare heights with a previous character, or steal a pen-stroke. This was my work area in Illustrator after completing everything.

Next up: importing into Type: 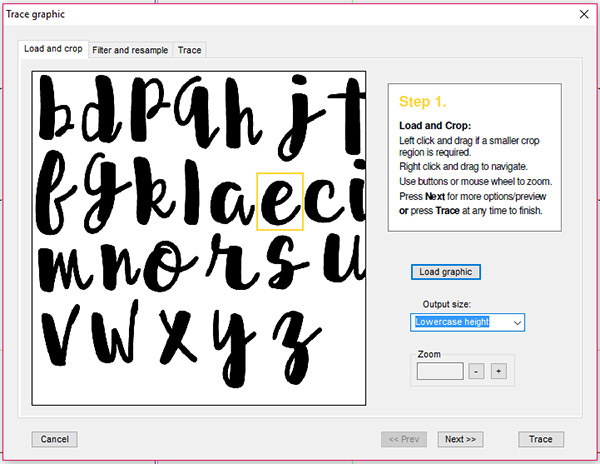 The import tool in Type is pretty cool; you can do all of your letters on one sheet, then just select the part you want to trace. Here I’ve selected the lowercase E, and I’ve told the program that this should be at lowercase height. (All of the uppercase letters were traced at uppercase height, as were the taller lowercase letters like b, p, q, g, and y.)

There are sliders to choose how many points on the curves it traces. The fewer points you choose, the more blobby and weird your letter looks. I opted to trace at a higher number of points, then do some editing: 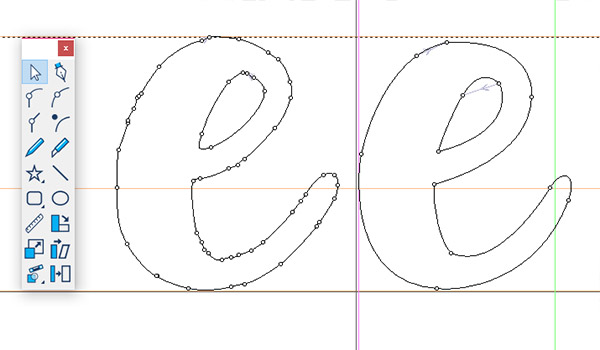 Here you can see the lowercase E as it came in (left), and the final version (right). Lots of points got deleted, lots of points got moved, and things were tweaked so I was able to get the same curvature with many fewer points. This makes for smoother curves, and quicker loading and drawing of the letter when you’re using the font. (I probably could have deleted a couple more points here, but this was just a test font. I tried to strike a balance between good and fast.)

This is also where I smoothed out all of those lumps where the wider strokes met the thinner strokes.

Because this font is meant to have letters that connect with each other, I also had to adjust the end stroke of each so that they all ended in the same place. You can see at the end of the final E, there’s a green line and an orange line that intersect. The green line at the end of each letter will line up with the pink line on the left side of the next letter, so both sides need to be set in such a way that they’ll meet up.

After all of the letters, numbers, and punctuation are imported and refined, it’s time for everyone’s favorite pastime: kerning. For those who don’t know, kerning is the adjustment of space between letters so that they look natural next to each other. In most font creation programs, you input kerning pairs: two letters at a time that might need a little nudge this way or that in order to look right. 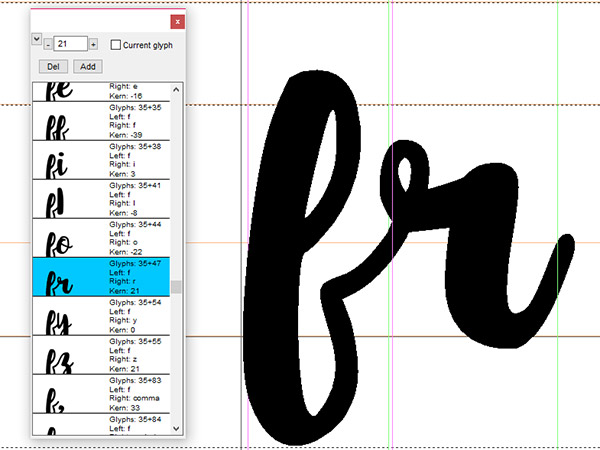 Kerning is especially intricate in a connected script font, because you need to make sure the letters are connecting correctly. A lot of the work was already done by lining up those pink and green lines (like on the image with the outlines of the lowercase E). But that’ll never be perfect: you have to take those pairs one at a time and do some scootching. My hardest time was getting every single lowercase letter to line up with the lowercase R. Some of them, like this “FR” combo, came out pretty darned well. A few connections aren’t perfect, but (insert balance of good and fast comment here).

Then it’s time to test sentences: 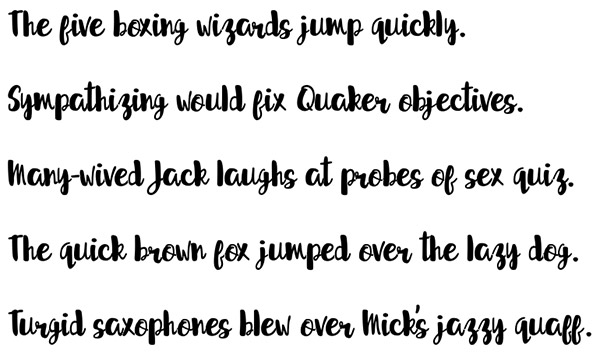 I start out with pangrams, which are sentences that contain all 26 letters of the English alphabet. A non-surprising number of them mention wizards, quickness, and guys named Jack. (And pangrams are a great source of band names. Who wouldn’t want to go to a concert hall to hear Turgid Saxophones play?)

After enough testing to make sure it looks all right (but not so much testing that it drives me nuts), I come up with a name. (Mostly this consists of figuring out what feeling the font gives me, hitting the thesaurus, and Googling to see if anyone else has used the words I like as font names.) Then I release my fonts out into the world for free. Because I love getting free fonts, so I figure other designers and artists love it too. I also get to create a cover image for the font: 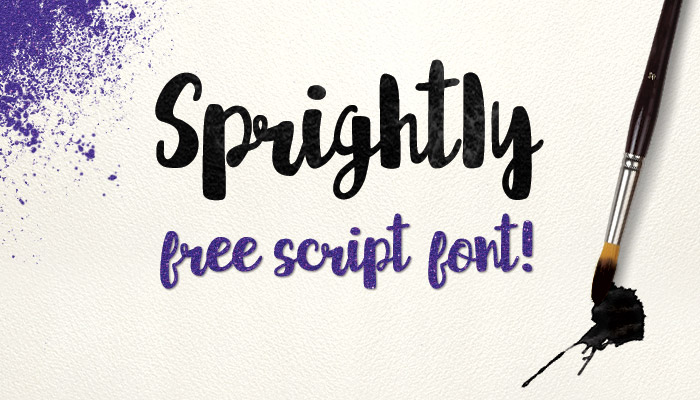 I do have a few fonts here on this site, but I’m putting the newer stuff in a couple of other places. You can download this font over at:
– My new portfolio website, missymeyer.com
– My portfolio at Behance