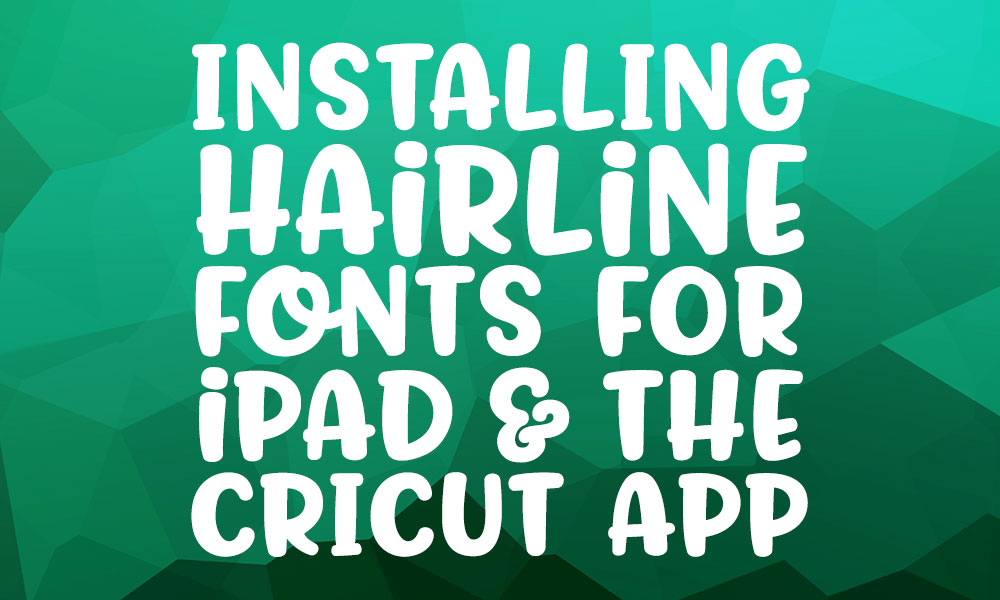 I’ve had a couple of folks ask for assistance with using my hairline fonts on the iPad with the Cricut App, because it’s a bit tricky.  The iPad still doesn’t handle fonts particularly well, though I keep hoping it will get better.  And hairline fonts appear to be an especially tricky thing, because they’re so thin that the iPad doesn’t like to show them.

I’ve gone through the process of downloading a hairline font to the iPad using the AnyFont app, and going through the weirdly long installation process.  For reference, I’ve recently updated to iOS version 12.4.1 as of October 2 (this update was released in late August), and all of my apps have also been updated. 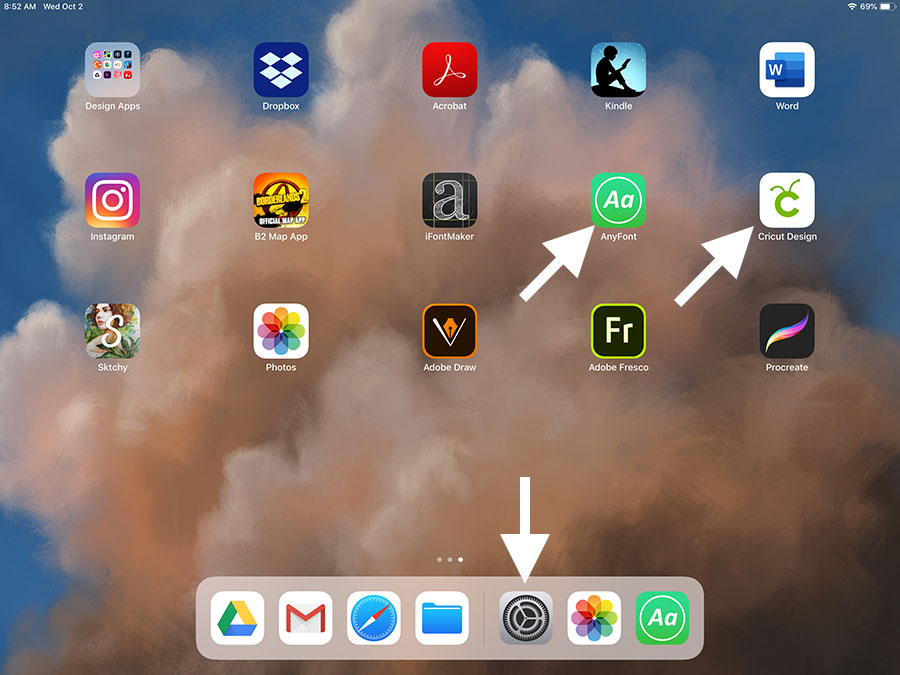 First up, let’s go over the apps you’ll need: 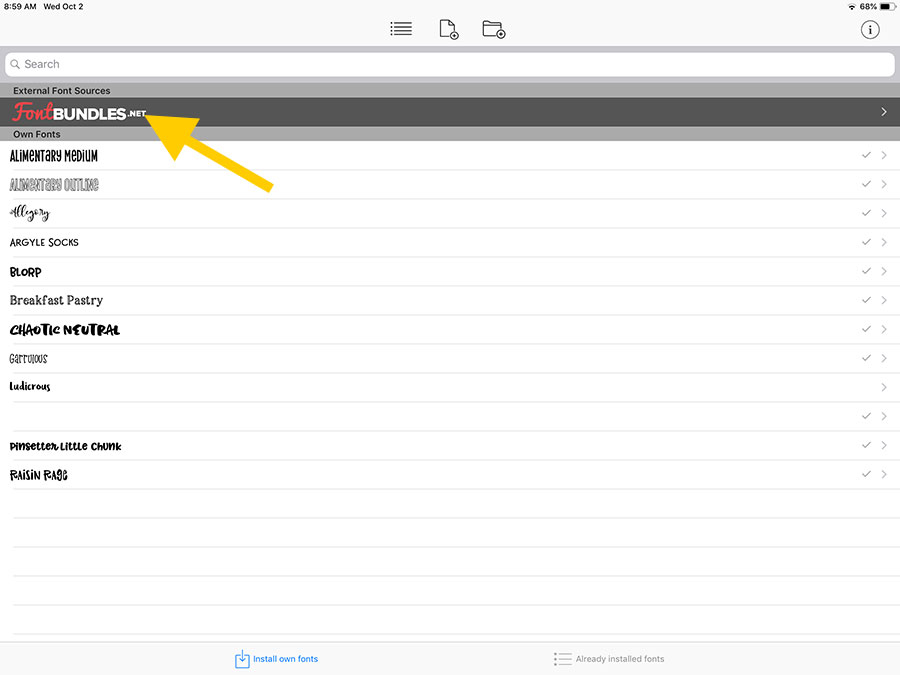 First up, I’ve opened the AnyFont app.  This is where you’ll do half of the font installation.  I’m going to demonstrate downloading from Font Bundles in this tutorial; if you’ve purchased from a different marketplace, you’ll want to copy the font file to Dropbox, and then open the font in AnyFont from there. 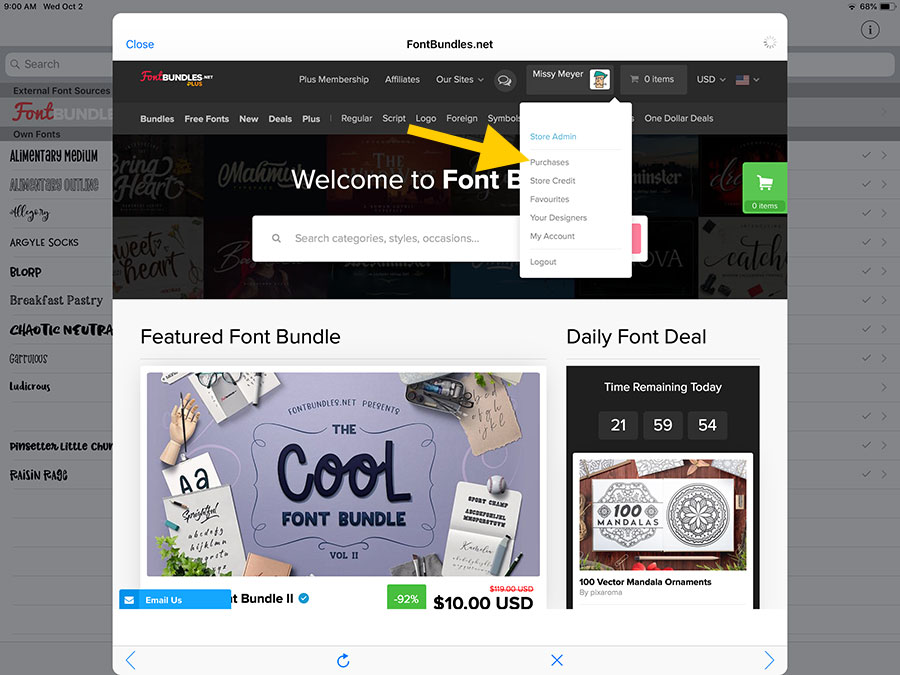 The full Font Bundles website will launch; you’ll need to log into the site if you haven’t already.  Once you’re logged in, tap on your name at the top, and tap on “Purchases” to get to your downloads page.  (Side note: make sure you’re logging into the account that you’ve purchased the fonts with!  I can’t tell you how many folks have gone to the site on their mobile device, only to find their purchases missing, because they accidentally signed up for two different accounts. They make the purchase using one device logged into one account, and then try to download it on a different device logged into a second account.  If this happens to you, no worries! Contact support and they can merge your accounts together.) 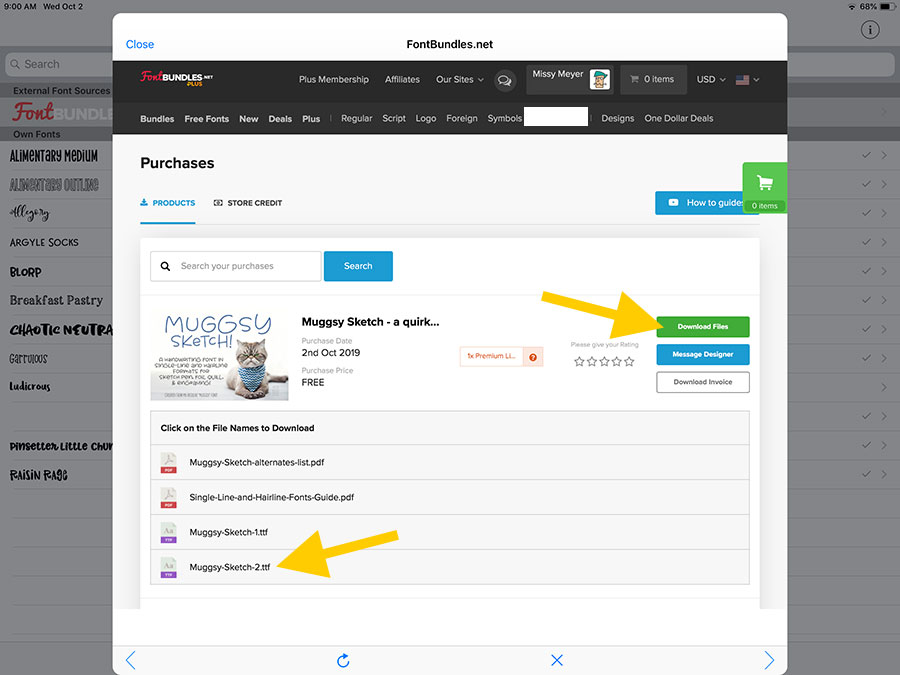 (You may also want to download the font ending in the number 1. I’ll get into why at the very end of this tutorial, so just tuck that away in your brain for now.) 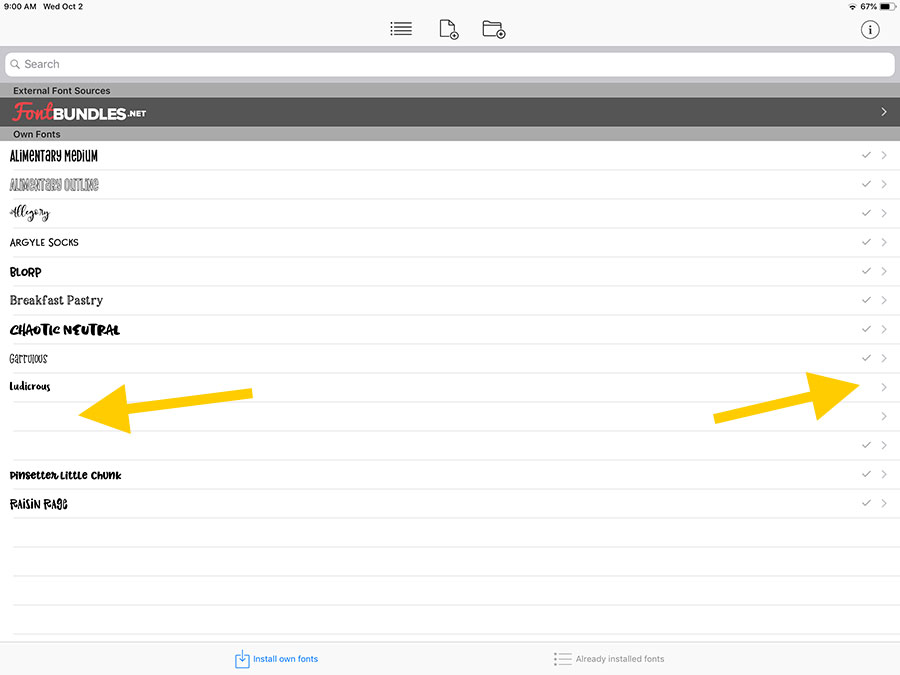 When the downloading is done, you can close out the Font Bundles window, and you’ll be back at the AnyFont main page.  And here you’ll see the biggest issue with installing these hairline fonts: they don’t show up! It must be because their lines are too fine, and the device can’t figure out how to display them.

Your fonts will show up here in alphabetical order, so that makes it somewhat easier to find them.  But as you can see, I have TWO blank lines next to each other. Which one is it?  Well, I know that I just downloaded Muggsy-Sketch-2, and I already have Pinsetter-Line-2 installed, so alphabetically, Muggsy must be the top one.

You can also look to the right side; fonts with a check/tick are fully installed to your device.  So look for the blank line with no check/tick; that’s the hairline font you haven’t installed yet. 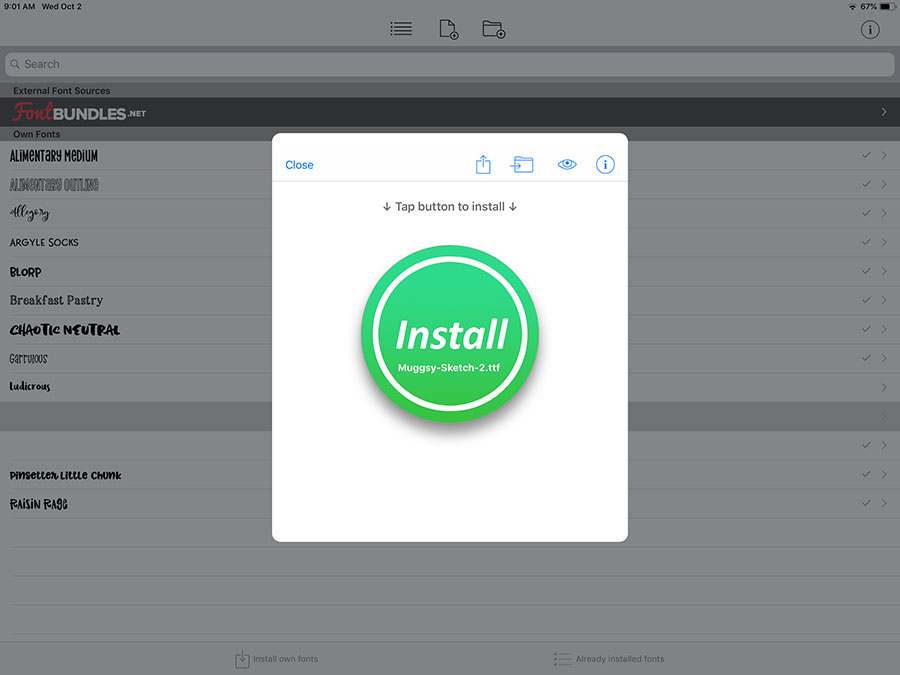 Tap on that blank spot where the font’s name should be, and you’ll get the big friendly “Install” button.  And that button will have the font name on it, so you can be sure you’re installing the right one.  Tap that big green button to start the installation process.

(Note: since the last time I installed fonts to my iPad, the installation process has become more complicated.  Get ready for a lot of steps.) 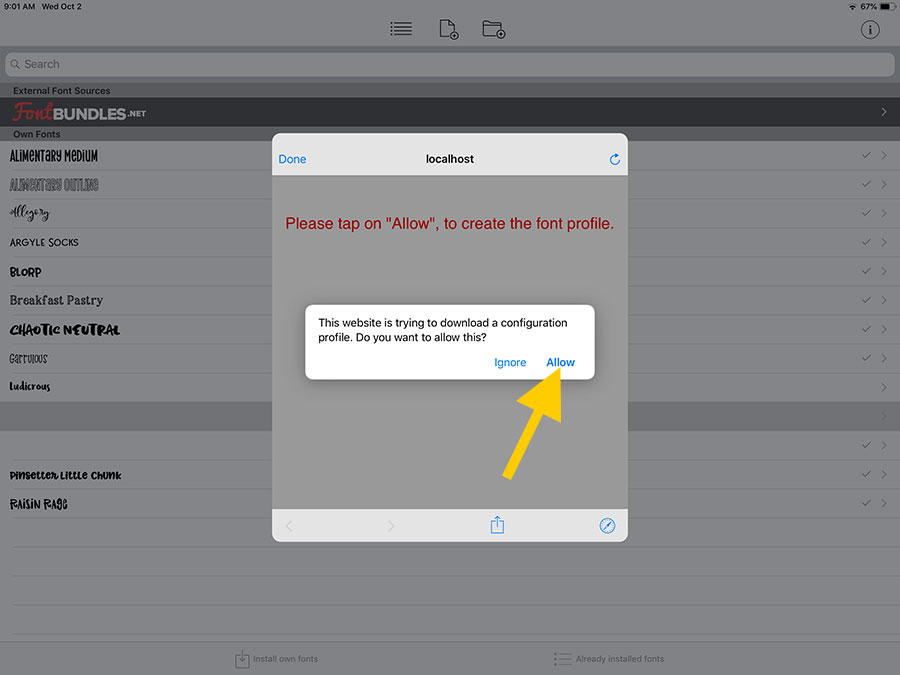 First up, your device wants to make sure you want to allow AnyFont to install this font.  Click on “Allow.” 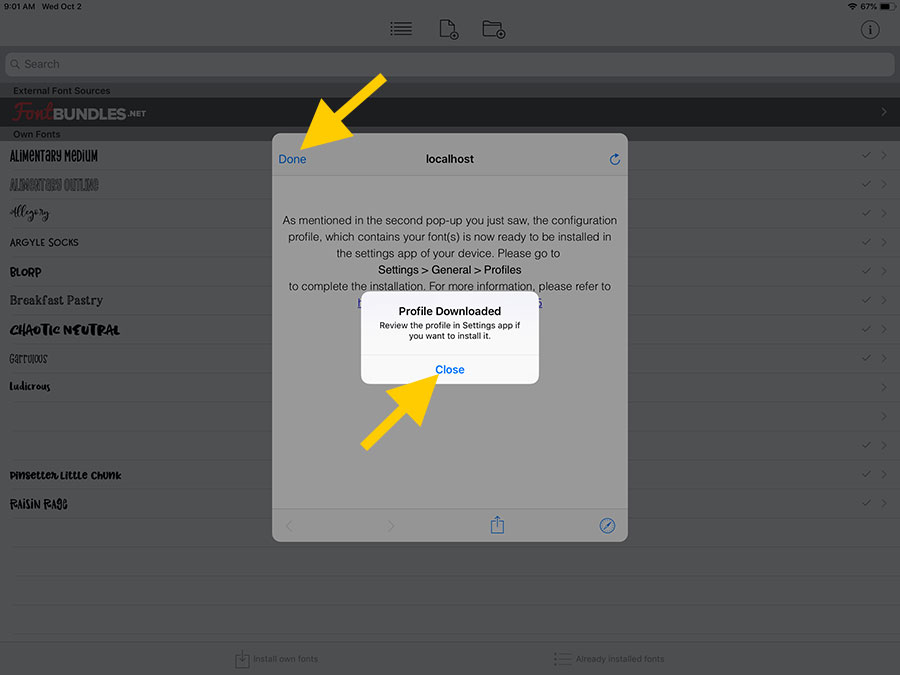 Next you’ll get this screen.  Click on “Close” and then click on the “Done” in the top corner of that weird “localhost” pop-up.  I do recommend reading the text on that “localhost” box; it’s basically telling us that installation isn’t done yet, and we need to go to the Settings app to do the second part.

(I’m pretty sure both parts used to be done through AnyFont, but that is no longer the case.)

Be aware, you can’t do this first step in AnyFont multiple times, then go to the Settings app to do part 2 multiple times. Believe me, I tried.  These have to be installed one at a time, going through all steps in both apps for each font before you can move on to the next one. 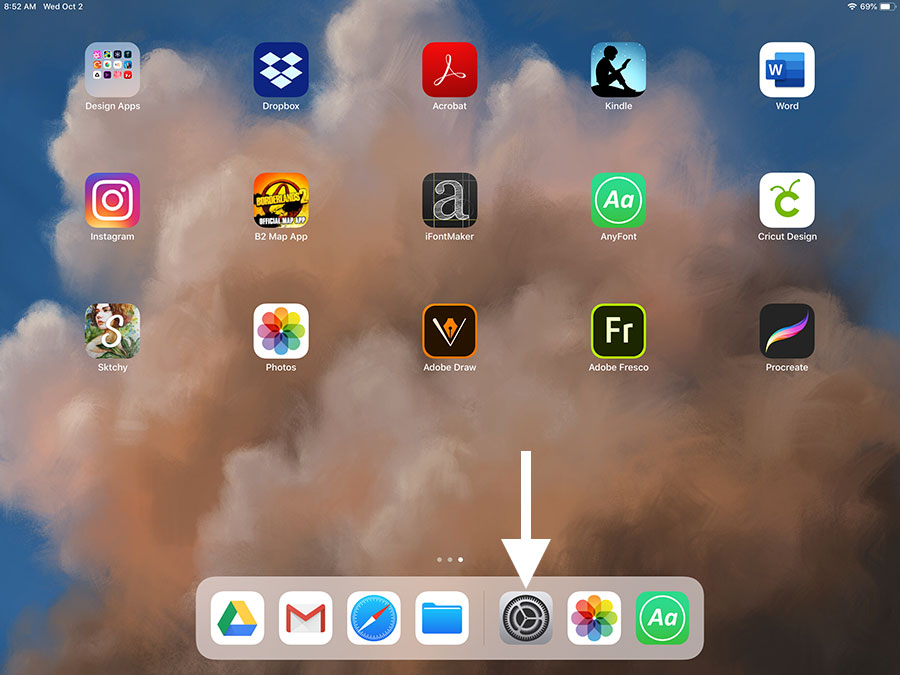 Next, press your Home button to get back out to your home screen, then go to your Settings. 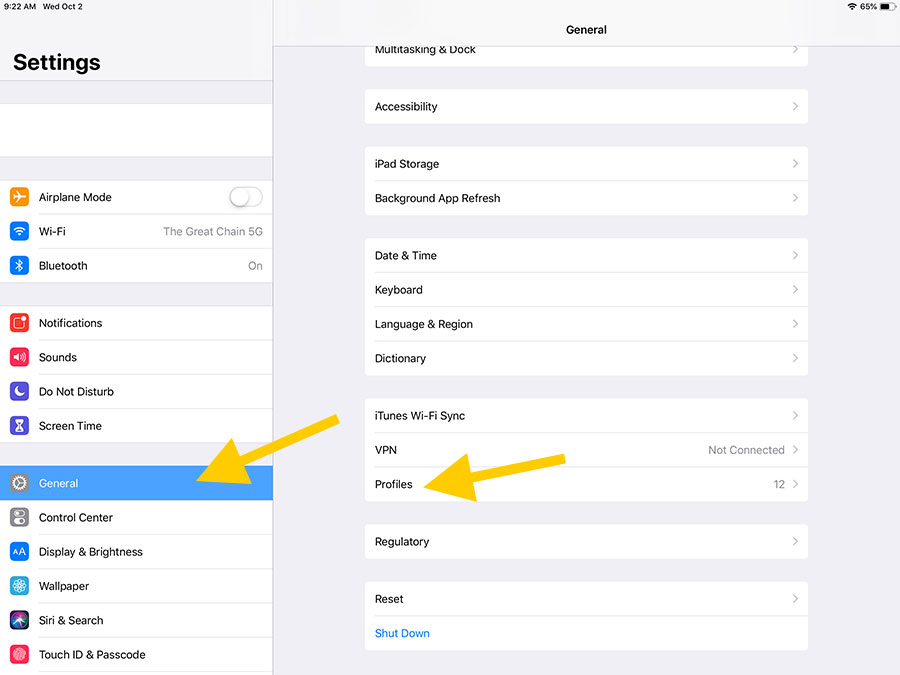 In the Settings menu, choose “General” on the left side, then choose “Profiles” on the right side. 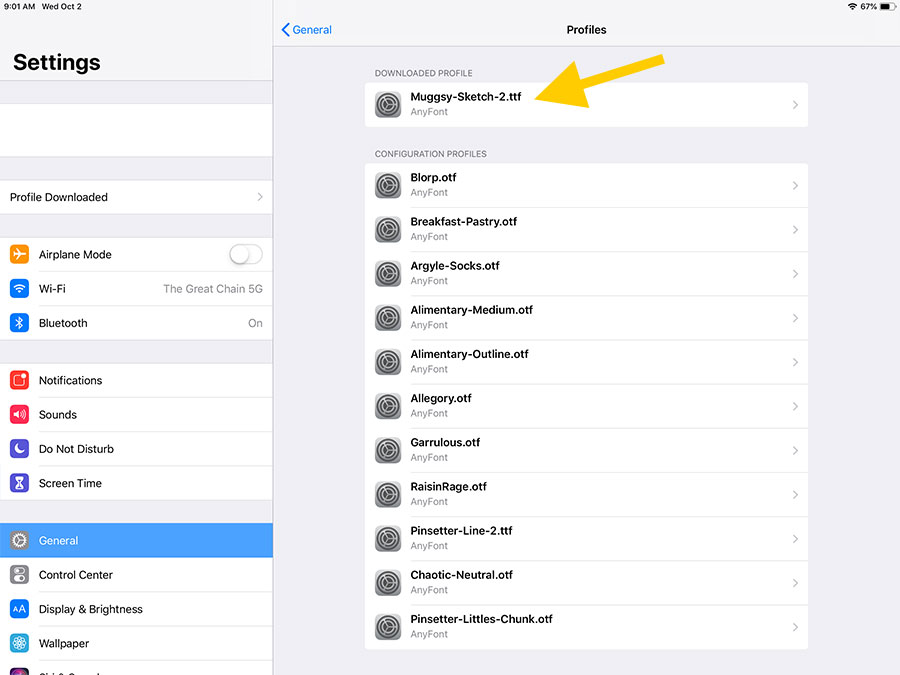 If you have other fonts installed to your device, you’ll see them down under CONFIGURATION PROFILES.  But the one we’re looking for will be up top under DOWNLOADED PROFILE — this is the one that has been downloaded, but hasn’t been fully installed yet.  Tap on that little guy, and get ready for a lot of quick taps. 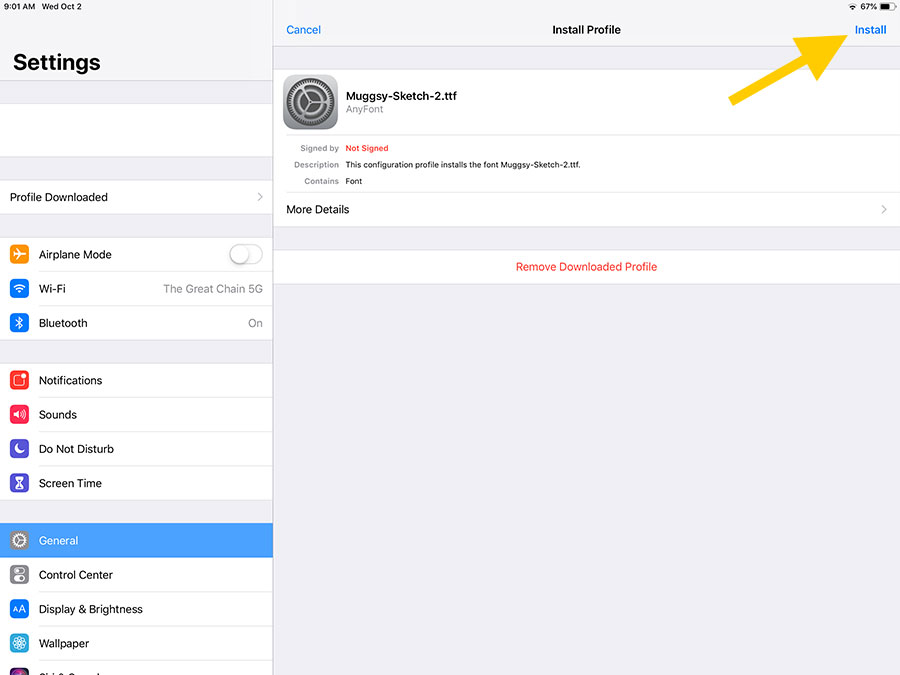 First you’ll get this screen, the initial step of installing the font.  Tap on “Install” in the upper right corner. 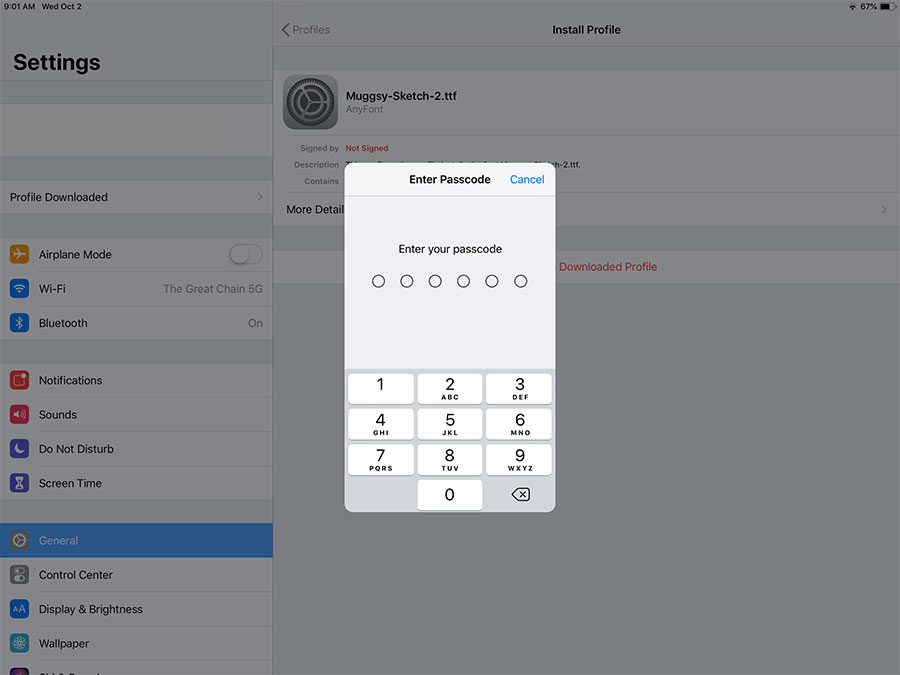 You’ll have to enter your passcode to continue, because why not?  Enter that sucker, and you’ll move on to…

More consent.  The device wants to make sure you absolutely want to install this thing.  Click on “Next” in the upper right.

Then more consent.  It will warn you that the profile is not signed.  Of all the fonts I’ve installed, none have ever been signed; I’m not even sure what that really means.  Click “Install.” 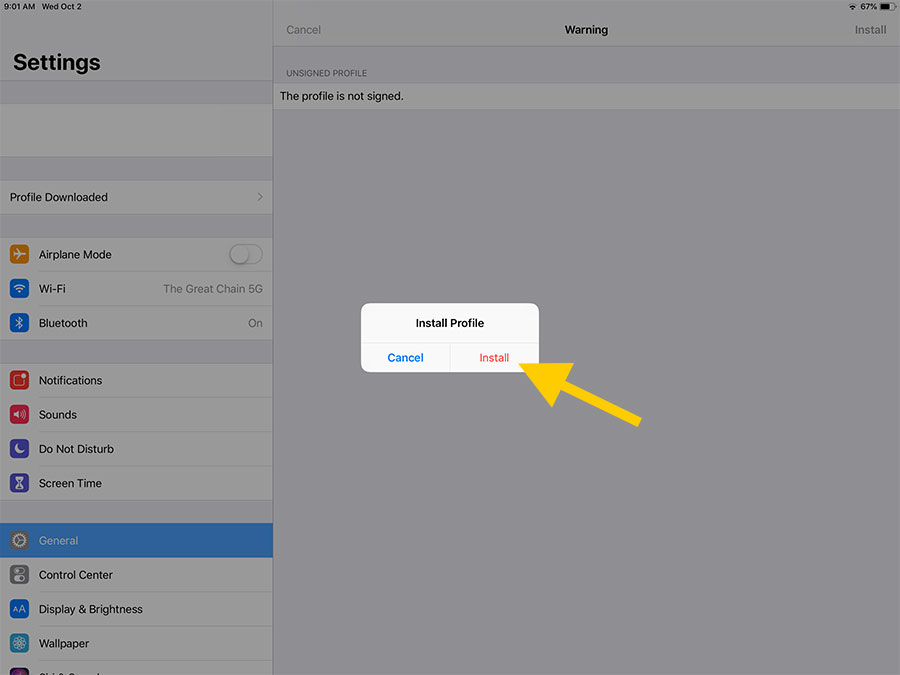 And then, how about one more place to tap on “Install” for good measure?

And here we are at the end of the tapping party.  Tap on “Done” in the upper right, and you’ll be done!  The newly installed font will now be listed under the installed profiles.  Weirdly, those aren’t in alphabetical order, and they aren’t in the chronological order in which they were installed.  I haven’t yet figured out how iOS chooses to sort those. Maybe by file size? Dunno.

Now, let’s move on to the Cricut Design app! 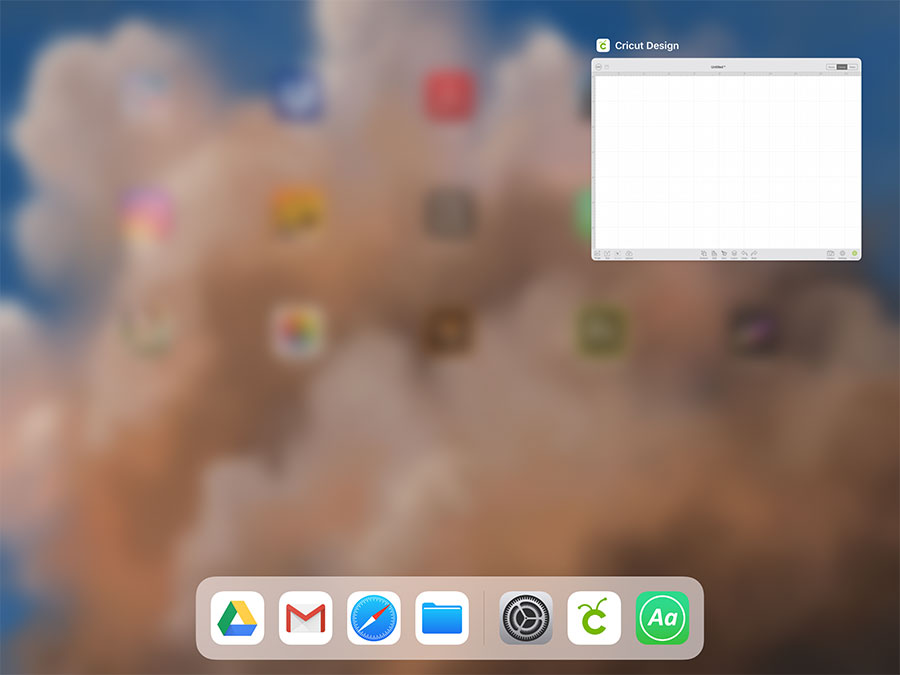 THIS IS THE MOST IMPORTANT PART FOR THE CRICUT DESIGN APP!!

You will need to shut the app down, and re-launch it, in order to see your newly installed fonts.  It only loads in your fonts list when you restart the program.  So double-click on your Home button, and you’ll get little thumbnail images of all of the apps you have open.  To close down the Cricut Design app, swipe upward on it so it disappears from this screen.

(And why not clear out some other apps while you’re in there?  I’m uptight, I shut down things on the regular.  Hate to have clutter.) 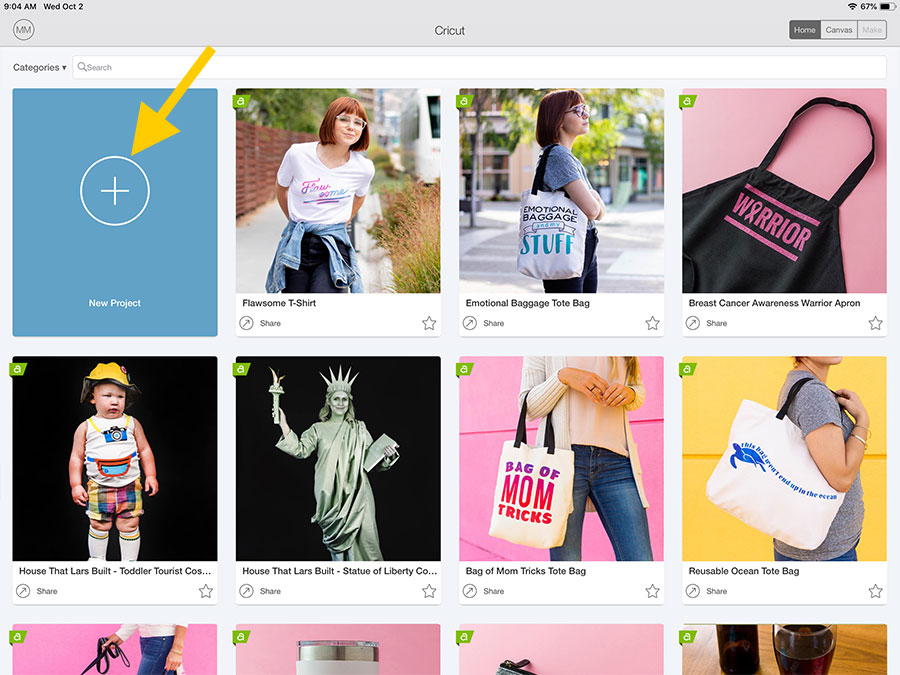 Launch your Cricut Design app again, and you’ll get the home page.  Click on “New Project.”  (Side note: the look on that toddler tourist’s face is slaying me.) 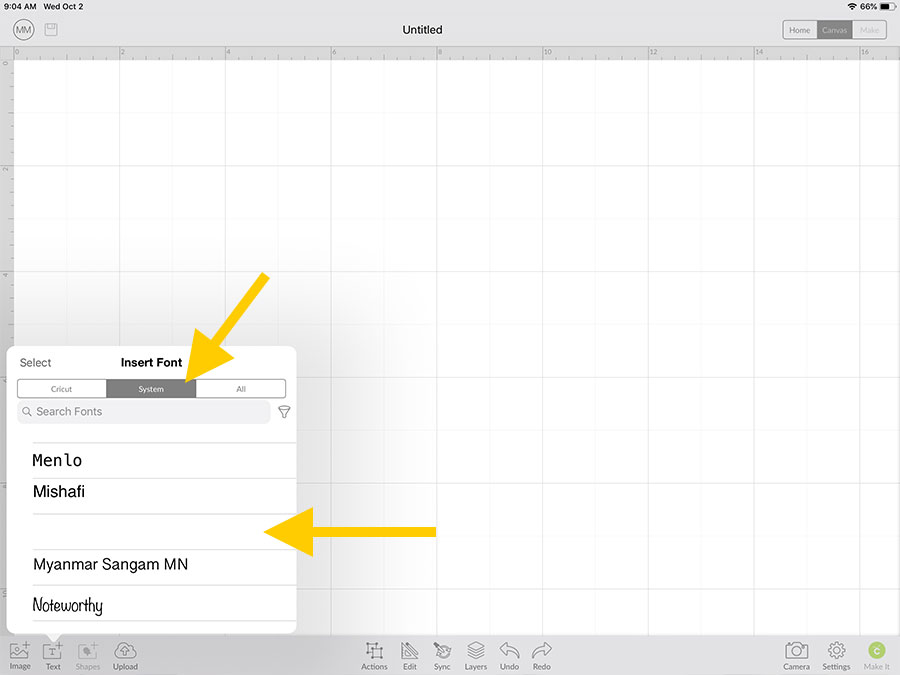 Click on the “Text” option in the lower right to get your font tools.  Select “System” along the top so that you’re only seeing the fonts installed to your device, and you don’t have to dig through the huge number of Cricut fonts.  Scroll down until you find a blank line in the right spot in alphabetical order.  This will be the hairline font — remember, the device can’t show a preview because it doesn’t know how to deal with the super-thin lines.

This is definitely Muggsy Sketch here, alphabetically between Mishafi and Myanmar Sangam MN.  (Those were both already on my device; your list of pre-installed fonts may differ.) 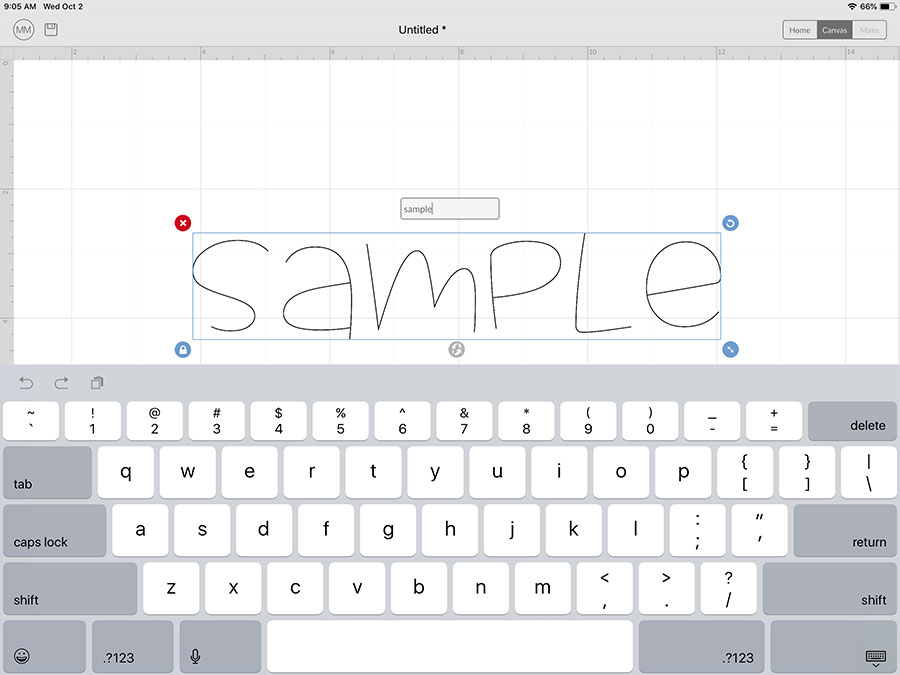 Fortunately, the lines of the font do show up when you’re typing out your text.  From here, you can resize, rearrange, and create designs to your heart’s content!

If a font has alternates, ligatures or other extras, you MAY be able to use a Unicode app to copy and paste them into your design.  Though I’ve tried a couple of Unicode apps, and neither of them could see the characters, due to the iOS in general not being able to see them.   My fonts also come with a PDF that has alternates and ligatures listed, but since the PDF has the characters from the font in it, the iOS device can’t see those either.

The best workaround I’ve found is to install both the hairline font (ends in the number 2) and the single-line font (ends in the number 1), and use the Unicode app to grab the alternate from the 1 font, then pasting it into your project in the Cricut Design app where you’re using the 2 font.  Both the 1 and 2 versions will have the same alternates, ligatures, and extras; they’re just made from different types of lines.  Here’s Muggsy Sketch 1 in the Unicode Character Viewer app. (I think the app was 99 cents.)

Totally funky, right?  But you can select the characters from here, copy them, and then paste them into the Cricut Design app where you’re working with the Muggsy Sketch 2 font.  All that gets copied out of here is the Unicode designation — the “computer name” for that character.  When you paste it into the Cricut Design app, all it sees is the name, and it displays the character associated with that name in the font you’re using.

It may also show that alternate in a very strange way when you paste it in:

That’s right, the double-M is apparently a … cup of coffee?  Because iOS has put its own emoji set into the same area that we font designers use for alternates. But it shows correctly in the project, and that’s what matters!

Some concluding thoughts: while you can install the hairline fonts to your iOS device, and the basic typeable characters found on the keyboard can be easily used, due to iOS challenges, you may or may not be able to enjoy the full font with all of its extras, alternates, and ligatures.  There are workarounds, and if you’re familiar with them, it may not be too difficult.  But in general, I still believe that fonts as a whole are difficult for iOS to handle, and if you have a desktop or laptop computer available, you’ll almost always have an easier time creating your designs on that.