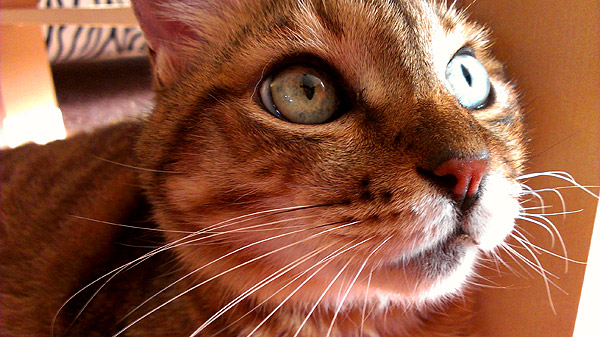 For those who haven’t heard yet, we had to put our wonderful cat Commie to sleep on November 22nd.

He’d been losing weight at an alarming rate, going from 16 pounds down to a little over 8; we did a bunch of tests at the vet, and he passed almost all of them with flying colors. It wasn’t one of the usual suspects: diabetes, thyroid issues, kidney, or liver. He did have a bit of protein in his urine, and evidence of a bacterial infection. We gave him kitty antibiotics, and planned on taking him back in for a new urine test when those were done, to figure out the cause of the protein.

Scott tried to take him in for the test a couple of times, but Commie got really good at having a pee at 5 or 6 in the morning before we got up, that sneaky little fellow. We figured we’d give it another chance on Friday.

For a few days, he’d been breathing a little heavier than usual. But on Friday (a day when he peed before we got up again, so devious), his breathing got heavier, and he started open-mouth panting. While dogs pant with their mouths open to cool down, when a cat pants it’s usually a pretty bad sign. Scott took him in to the vet that afternoon, and I met up with them there after work; they were just finishing up taking x-rays, so we could get a better idea of what was going on.

The x-rays showed that his chest was full of fluid. The vet talked us through the possibilities, but it was clear to all of us that he was in pain, and any type of diagnostic testing would cause him even more pain. And of the two big problems it could be (congestive heart failure or feline infectious peritonitis), neither could be cured. So we made the painful, difficult choice to have him put to sleep.

We had a great 15 years with Commie; it was sheer luck that the day we went to the Humane Society was the same day he’d just been released from quarantine, having been removed from a seized Russian fishing vessel off the Washington coast. The crew was deported, and a half-dozen animals went for adoption. We took little Commie, less than a year old, into the little visiting room, and he climbed straight onto Scott’s lap and curled up for a nap. From that very first day, he was a sweet, cuddly, wonderful lap cat with a great personality. My friend Allison referred to him as a gentleman, and that’s absolutely what he was.

We thought we were going to lose him three years ago, when he had a tumor in his eye socket; it didn’t react to steroids, antibiotics, or anti-inflammatory medication, but after we made the decision to not torment him with more hopeless treatment and just enjoy our last few weeks with him, the tumor spontaneously went away. The vet referred to him as a miracle cat. So we ended up getting three bonus years of him. Which, of course, wasn’t enough.

It’s interesting to note that he passed on Humane Society Day. It’s thanks to them that we had 15 amazing years with one of the sweetest cats I’ll ever know. 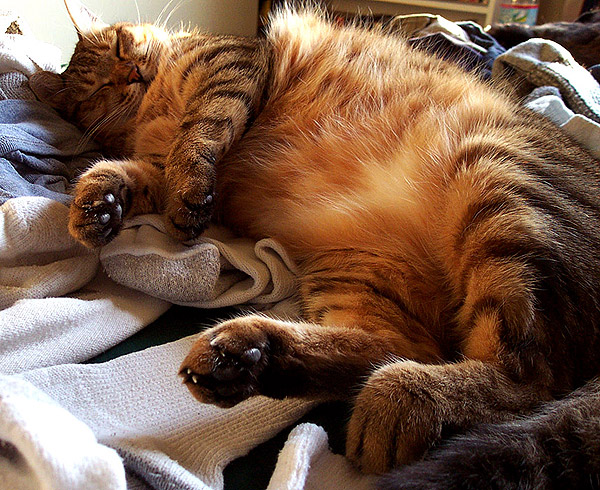